An
amazing event is waiting for all football fans, sports fans and
patriots in 2018. For the first time in the history Russia will host
the World Cup. The tournament is organized also for the first time on
the territory of former Soviet Union and Eastern Europe from June,
the 14th
till July the 15th,
2018. It is expected that a great number of fans from all over the
world will come to Russia that is why serious security measures are
planned. Sport competition should take the center stage but not the
political battle. Bookmakers also look forward the final part of the
tournament. The fans are making a huge number of bets using the money
line and “on-line” option. For successful betting it is necessary
to bear in mind a lot of factors: readiness of the teams, the
condition of the leaders, the latest teams’ news, results of the
qualifiers and also the peculiarities of the championship itself.

The
matches of the tournament will be held at 12 stadiums in 11 cities.
The geography is rather wide: Moscow, Sochi, St-Petersburg,
Kaliningrad, Volgograd, Kazan, Nizhny
Novgorod,
Samara, Saransk, Rostov-on-Don,
Yekaterinburg.
The majority of the cities have necessary sport arenas but they need
reconstruction badly. Also very active building of new sport objects
which meet all international requirements is in progress.

The
final part of the tournament will host 32 national teams (8 groups
with 4 teams in each). The teams which will take the first and the
second places in their quartets reach the 1/8 finals. This stage
matches will be held from 30th
of June till 3rd
of July. On the 6th
and 7th
of July the ¼ finals will be held and on the 10th
and 11th
of July – semifinals. The main match of this championship will be
held at “Luzhniki”
on the 15th
of July. The day before the final match the teams which stop in one
footstep away from the final match will fight for the 3rd
place. 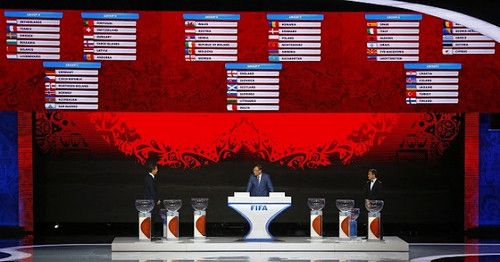 Bookmakers
began to accept bets on the championship even some years before its
beginning. Without knowing the final squads of the teams it is very
hard to come to any conclusion but it is possible to bet on “sweet”
odds which for sure will be changed by the tournament start.
Actually, almost at every international tournament one and the same
national teams which are capable of demonstrating good results are
chosen to be the favorites.

Bookmakers
propose to practice betting on a huge number of outcomes as the World
Cup attracts a real army of football fans and the clients of
bookmakers. It is possible to bet on a definite match, group result,
promotion of the team to play off stage or the championship outcome.
Also the bets that are put on the best goal scorer of the tournament
are accepted but it is hard to determine this football player.
Theoretically, the football player whose national team will move
further on the tournament net has greater chances to become the main
goal scorer. However even at the group stage the football player can
score goals regularly and his result can be left unbroken.

The
“standard” outcome bets, totals and handicaps on the matches are
accepted. A great variety of statistical bets options (corners,
yellow cards), on the authors of scored goals, the probability of
sending-off or penalty kicks is proposed. The number of proposed
betting outcomes differs from bookmaker to bookmaker. But the
majority of bookmakers are trying to cover the maximum possible
options, propose different bonuses and run promotions in order to
attract the clients.

How
to make bets on World Cup 2018 in Russia

The
betting on important international tournaments has several
peculiarities. According to definite options they differ from the
betting on matches of national championships and other competitions.
For example, the most important criterion for bettors will be the low
probability of fixed matches. The precedents had happened when the
teams were suspected in unsporting conduct but real evidences were
not presented. The outcome and the possibility to show what you are
is of great importance during such football shows. Reputation of the
native country for many football players is not comparable with money
for a fixed match.

At
the same time the matches that sometimes are played at the
championship have unpredictable character. Even an underdog who had
managed to build an adequate defense and acted actively during the
counterattacks is able to win over the favorite. The game of many
underdogs attracts more fans than the pragmatic game of the
favorites. Bright and emotional national teams which are able to
fight for the every piece of the football field simply make the
audience fall in love with them. That is why it is useless to pay
attention only on the bookmakers’ odds. It is advisable to look
through several matches of the teams and only after doing so you can
decide about kinds of bets.

The
large number of cities hosting the matches of the championship
propose different climatic zone. Some teams easily tune themselves to
the climate and are ready to demonstrate their best qualities while
others undergo great difficulties. The game at home arena is easier
for some national teams not only due to climatic conditions but also
due to fans support. Only the national team of Russia will play at
home arena and for the rest of the teams the matches will be held at
neutral fields.

The
teams will meet only one time (except the group matches and play off
with one opponent) that is why the analysis can be complicated. For
example, within the Champions League the clubs are playing two
matches and that is why it is able to presuppose how will the
opponents act bearing in mind the outcome of the first meeting. While
you practice World Cup betting you have to analyze the physical form
of the team and the matches against practically equal by experience
opponents.

The
packed schedule of matches really keeps the sportsmen up but it also
accumulates the tiredness. If the national team is lacking in
substitutes who are able to strengthen the team it would be difficult
to gain the success. The coach may rely only on core team and in case
of injury or unpredictable match it won’t be possible to change
anything. No matter how good the training is the sportsmen get tired
and this leads to decrease in efficiency and the loss of
concentration.

The
football players don’t have to search any additional motivation as
the performance at the World Cup for many is considered to be the top
of the career. It is necessary to demonstrate the best qualities here
in order to prove the level. Young football players receive a chance
to show themselves and attract the grand clubs. The presence of the
title of World Cup Champion really rises the probability to continue
their career in nominal “Real”, “Barcelona”, “Bayern”,
“Juventus”, “Chelsea” and other top clubs.

Every
international tournament hosts some national teams which are
considered to be the favorites (Germany, Argentina,
Brazil, France, Spain, Italy) and the forthcoming championship is not
an exception.

The
current World Cup Champion – the national team from Germany
– the bookmakers consider to be the main challenger for winning the
trophy. The Bundesteam had accustomed all the football fans to the
fact that it is performing stably during all competitions that it is
taking part in. The success formula is the great mutual understanding
between the football players, the great performance state, discipline
and focus on the results. The large number of top football players is
playing not only in first team but as substitute as well. Joachim
Löw
can change the game pattern depending on the opponent without the
sacrificing the quality.

Argentinian
national
team is hungry of victories and is also the powerful force. The team
had lost several finals of Copa America and also lost the important
match during the last FIFA World Cup. The great importance has the
physical form of Messi as a lot depends on him in Barcelona and
national team. Lionel will try to help his team to break unsuccessful
series and top-class partners will support their leader. A lot of
fans are very sceptical concerning the footballer talent as he didn’t
manage to gain a success with the national team.

Brazil
is the repeated World Cup Champion. The football players have great
experience in participating at the largest tournaments and represent
the top football clubs. The coach has a great choice of participants
and is able to prepare several equal squads. The leader of the team
is Neymar who is also dreaming of gaining the sacred trophy. He
doesn’t lose his goalscoring talent but this season he is working
more for team.

French
football
players didn’t forget their offensive defeat at Euro 2016 where
they lost the final against the Portuguese. The football players of
the first team are having their best season and young players are
ready to move on the higher level. Particular representatives of the
French clubs really did all the best at Euro Cups and that is why it
is a high time to demonstrate their professionalism at international
arena.

“The
golden years” of Spanish
national team became the history and the last World Cup vividly
demonstrated this fact. Even some years ago “the red Fury” didn’t
have any rivals in Europe and in the whole world but now it is
undergoing the change of generation. The squad has top class football
players but is it ready to become a real team?

Situation
of Italian
national team is similar with the Spanish one. During the last Euro
the team had manage to surprise a lot of people with very good
football however the squad was not ideal. There are a lot of talented
young football players who can become the foundation of renewed
national team.

The
tournament favorites will use their best football players who are
healthy and demonstrate perfect physical fit. During every match the
battle will be held up to the last minute that is why carelessness
and slackness will surely lead to defeat. The rivals have top class
players who are acting up to the end and are ready to realize every
opportunity to score.

Actually
we expect a great number of bets made on every match of the World Cup
and the limits for them are rather huge. The number of new clients of
the bookmakers before the tournament usually rises and that is why
bookmakers are trying to propose for bets a lot of outcomes. Within
the month the bettors are able to watch the great football and the
game of best football players of the world and practice betting. Due
to the shortness of the tournament and holding only one time in four
years it is not possible to refer to the World Cups as the tool of
earning money. But to bet on interesting outcomes is possible in
order to rise the interest towards football competitions however fans
will surely take part in real football show even without thinking
about profit.