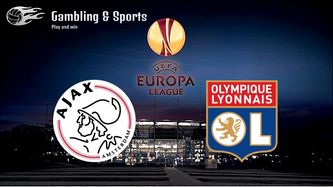 Analytics
and review of the match Ajax
– Lyon

One
of the matches of the ½ finals of the Europa League will be held
between Ajax, Holland and Lyon, France on Wednesday. The match will
start on the 03rd
of May, Wednesday in Amsterdam at 18:45 (GMT+1).

Both
clubs have spent rather difficult ¼ round match. Lyon destroyed
Beşiktaş, Turkey only by the penalty series and Ajax was able to
win over Schalke, Germany during the injury time. But now Ajax and
Lyon will meet at ½ semifinals and both matches are going to be very
interesting.

A
lot of football clubs can envy the number of scored goals this
season. Lyon is not worse especially during the second half of the
season. But both teams miss goals regular too. But neither Ajax nor
Lyon are not used to play on defense and that means that we can wait
for an interesting first match.

Ajax
is able to avoid the defeat at first match. But goals would be scored
for sure. The best bets on the match Ajax – Lyon will be:

Ajax
had won 10 last home matches in a row.