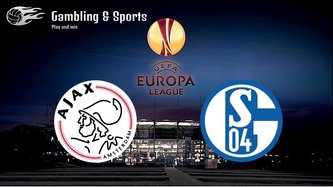 Analytics
and review of the match Ajax
– Schalke

One
of the matches of the ¼ finals of the Europe League will be held
between Ajax, Holland and Schalke, Germany. The match will start on
the 13th
of April, Thursday in Amsterdam at 21:05 (GMT+1).

The
last round for both clubs was very tense. Ajax during the first away
match had lost to København with the score 1:2, but it had managed
to win at home arena with the score 2:0. Schalke, in its turn, had
played at home with a draw 1:1 against Borussia Mönchengladbach and
had ended the return match with the score 2:2 and thanks to this fact
it had moved further.

What
do we expect from the forthcoming meeting? We can argue a lot about
the favorite but the both matches will be interesting for sure. Both
teams practice attacking football and forget frequently about the
defense.

Ajax
is able to avoid the defeat during the first match. But the guests
will score for sure. The best bets on the match Ajax – Schalke will
be:

Ajax
– Schalke had never played with each other official matches.

Ajax
had won 8 last home matches in a row.