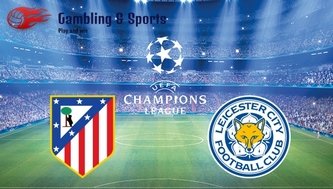 Analytics
and review of the match
Atl.
Madrid – Leicester

On
the 12
th
of April the first match of 1/4 finals of the Champions League
between Atl. Madrid, Spain and Leicester, England will be held. This
match will be held in Madrid and will start at 20:45 (GMT+1).

This
pair of football teams is considered to be the most predictable among
all ¼ final pairs. Yes, a lot of fans may say that only few believed
in the champions’ title of Leicester but that time the team way
playing in a different way. Last round the Englishmen had passed
another Spanish club – Sevilla. But still, Atl. Madrid is stronger
than Sevilla and secondly Atl. Madrid is much more experienced than
both Sevilla and Leicester. This will play the key role during the
forthcoming match.

Atl.
Madrid for sure will do all to win the first match. We are
practically for 100% sure that the hosts will manage to do this. In
our opinion the best bets on the match Atl. Madrid – Leicester will
be:

Atl.
Madrid had missed only one goal during 4 home matches of the current
Champions League.

As
for now Leicester had managed to won only 3 away matches of all
tournaments this season.