Betting tips on the match of the Champions league Basel – Arsenal 06.12.2016, the last round of group stage. Review of quotations by the most popular online bookmakers.

On the 6th of December 2016 at 21:45 (GMT+2) on the football field “St.Jakob-Park”, Basel Switzerland the match will be held. The club will host “Arsenal” London in frames of the final round of the group stage of the Champions League.

“Red-and-blues” now are taking the last line of the group, but have all chances to get into the Europe League. In order to achieve this goal the team needs to win this match. If in another pair “Ludogorets” will lose, for“Basel” even a draw will be enough. For the last 5 matches the club has managed to score only two goals. And what is the most remarkable fact that both matches were held on home field. Two different football players have shown themselves and that is why it is difficult to choose the most successful one. But according to the performance in the Championship of Switzerland Seydou Doumbia is the best one.

And the club needs “PSG” mistake also the club has to win. The club of Arsen Venger experiences difficulties while away matches – draw 1:1 in Paris and comeback win 2:3 in Razgrad, Bulgaria. Mesut Özil is the author of 4 goals and 2 assists. He has taken part in almost half of the goals. 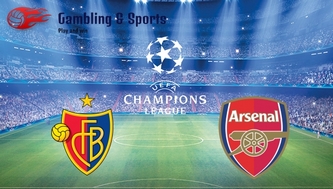 There was no struggle between these two teams in London. The hosts from the very first minutes had taken the advantage and by the middle of the first half were leading with the score 2:0 thanks to the doubly of Theo Walcott. The score remained to be 2:0 as there were no goals any more.

In our opinion, this away match for guests won’t be easy. That is why one goal would be missed and thanks to the experience and high class the team would score. That is why the Gambling&Sports predictions is: