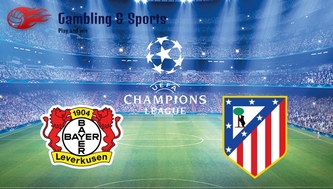 Analytics
and review of the match
Bayer
– Atletico

One
of the pairs of 1/8 finals of the Champions League consists of
Bayer,Germany and Atletico, Spain. The first match will be held in
Leverkusen on the 21
th
of February and will start at 21:45 (GMT+2).

Bayer
this season is far away from real stability. As for now, the team
takes only the 9
th
line in the Championship of Germany but it still has managed to get
the place in the Champions League play off. During the group stage
Bayer appeared to be stronger than Tottenham and CSKA. Only Monaco is
ahead of Bayer. But in pair with Atletico the German club is seemed
to be weak.

Last
Champions League Atletico has stopped only in one step to a victory
having lost the final to Real Madrid. This season Atletico isn’t
such a strong team, but who knows… But the 1/8 stage during two
last Champions League nearly led the team to fiasco. Two years ago
Atletico has already met with Bayer during the similar tournament
stage. The first match was held in Leverkusen and ended with the
winning of German team in a series of penalty kicks. Last season
Atletico at the 1/8 finals has experienced some troubles in a match
with PSG. No goals were scored during two matches and Atletico has
managed to get into the next round only due to a series of penalty
kicks.

Atletico
now is experiencing some troubles. It would be hard to win in
Leverkusen. In our opinion the best bets on the match Bayer –
Atletico will be:

These
clubs had played with each other 4 times. Total 2.5 goals hadn’t
been taken in any of the 4 matches.