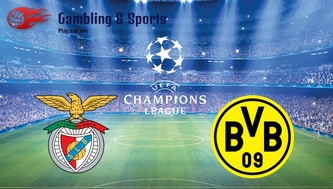 Analytics
and review of the match
Benfica
– Borussia D

One
of the pair of 1/8 finals of the Champions League consists of
Benfica, Lisbon and Borussia, Dortmund. The first match will be held
in Portugal on the 14
th
of February and will start at 21:45 (GMT+2).

Benfica
with great difficulty has reached the play off. The team has gained
only 8 points and takes the second line in the quartet B, being ahead
of Beşiktaş, Turkey only with one point. Moreover, during the last
round Benfica had all chances to miss the play off, but Dynamo Kiev
has won over Beşiktaş with one point and gave the chance to
Benfica. But further horizons for this club are rather foggy.

Borussia
Dortmund became the winner of the group F, in which Real, Madrid
considered to be a favorite. But Borussia has shown more confident
game and became the highest-scoring team during the group stage. Also
Sporting, Lisbon was playing in the group F. Borussia has won over
this club twice with the score 2:1 and 1:0.

The
chances of Borussia D to enter ¼ finals are definitely higher. But
Benfica at home will be fighting, of course. Perhaps, this match will
be very interesting.

Benfica
rarely loses at home arena. Bearing in mind all the difficulties that
Borussia D is experiencing during the away matches in this season, it
will be very hard to solve all questions during the first match. In
our opinion the best bets on the match Benfica – Borussia D will
be:

Benfica
has played only one match at home arena.

Prior
to this match these two clubs have never met with each other.