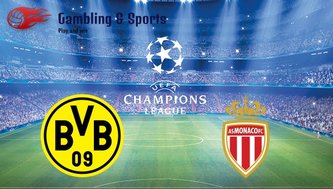 Analytics
and review of the match Borussia D – Monaco

On
the 11
th
of April, Tuesday the first match of Champions League 1/4 finals
between Borussia, Dortmund and Monaco, France will be held. This
match will be held in Dortmund at 20:45 (GMT+1).

Last
round of playoff Borussia was fighting with Benfica and it must be
admitted that after the draw the obvious favorite is Borussia. The
team of Thomas Tuchel had won with the score 4:1 according to the
total sum of two meetings and moved to the next stage. And here it
will face with not very strong opponent but if you make it clear you
will understand that Monaco is able to claim for a semifinal berth.
The French team had passed Manchester City having scored 6 goals for
2 teams. It has missed also two goals but thanks to 3 goals scored
during away matches it had moved further.

At
home arena Borussia very rarely demonstrates poor results. This time
the most goalscoring team of the current season of Europe comes to
Dortmund. It surely won’t be boring to watch this match.

This
match for sure will be interesting and rich in goals. These clubs are
not playing in a different way. In our opinion the best bets on the
match Borussia D – Monaco will be:

These
clubs have never played with each other before.