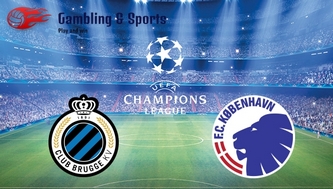 Analytics and review of the match Brugge – Kobenhavn

Brugge Belgium will host Kobenhavn Denmark in the frames of the 6th round of the group stage of the Champions League 2016-2017. The match will start on Wednesday , at 21:45 (GMT+2).

Brugge for the last 5 matches was not able to get even one point and has no chances at all to take the third line. But Kobenhavn has all chances to get into the play off of the Champions League.

The team hosted very “warmly” Brugge at the end of September 2016. Kobenhavn has won with the score 4:0 and this score could be even higher. Now the football club has greater motivation to win.

For Kobenhavn this match is the most important in current season. It is impossible that the club will lose it. In our opinion the best bets on the match Brugge- Kobenhavnwill be:

Brugge has hosted Kobenhavn3 times already. Kobenhavn has won 2matches and only one match has been finished with a draw.