Home Cash out betting. What does cash out mean and how is it calculated?

Cash out betting. What does cash out mean and how is it calculated?

This
training article at Gambling&Sports will help us to understand
what do you know about Cash Out betting and why it is necessary and
how does the bookmaker calculate the sums of wins or losses in case
of early bet calculation.

Cash
Out is an opportunity to demand early bet calculation from bookmaker
or at the exchange house– prior the moment the outcome on it will
take place. You either record your profit which is less than it could
be or you record the loss which is less than a bet.

The
exchange house Betfair was the first in the industry to propose cash
out betting in February, 2011. After that online bookmakers began to
introduce this technology. Now this function has reached the new
level: it can be used with a large number of events, it is possible
to order early calculation of a part of the bet and to leave the
other part in the game. 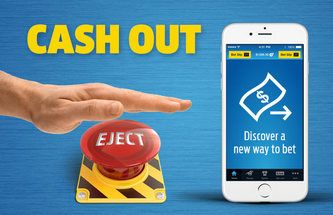 How
is cash out betting calculated?

There
is a formula of calculation of net profit / loss without a margin:

where
A is the sum of bet, B – initial bet coefficient, C – bet
coefficient at the time of cash out.

Let
us work with an example. Let us look at Real Madrid against Barcelona
in Madrid. Let’s say bookmakers give 2.8 on Barcelona. You bet $100
on their victory over Muscovites. And, thanks to a miracle, Barcelona
opens the score in the middle of the first half. Time moves on and
here the coefficient on Zenit victory is 1.4. But Real Madrid wakes
up and begins to attack more actively.

How
much will you earn if now you secure your bet on Barcelona victory?
That is what we will get:

That
is you will get $100 of net profit if you overlap the bet now while
potential net profit on this bet is $180. Not bad!

It
is possible to calculate net loss if the match has gone on an
unexpected way and the coefficient has increased in live. For
example, you have put $100 on Barcelona with coefficient 2.8. But
during the match due to unfavorable events this coefficient has
increased up to 3.5. You want to record this loss and not to lose the
whole bet:

But
this formula doesn’t work with the bookmaker’s margin while using
Cash Out. In practice you will get not $100 net profit, as in this
example, but $85-95 depending on the bookmaker. One bookmaker has low
margin and some – high.

Pluses
and minuses of cash out

Cash
out should be considered from the point of view what benefit it will
bring to the player. This function has both positive and negative
sides.

1.
This is convenient. All you need is to press one button instead of
carrying out cash out calculations yourself.

2.
There is an opportunity to record the profit. If you have made a
risky bet and events have started to be favorable to you – for
example, your mid level team from La Liga has scored a goal to
Barcelona – you can get pleasant profit and don’t wait for
Barcelona to wake up and score twice more into the gates of bold
rival.

3.
There is an opportunity to save a part of the bet. If the events turn
to be unfavorable you can agree with the loss of a part of the sum
and to take the rest of the money.

4.
This is extremely hazardous. Now you are not only watching whether
you bet is passing on not but also you are constantly analyzing
whether it is high time to cash it out or to wait for some time.

1.
It is less profitable, than independent bet insurance. You pay a
margin twice when you use the Cash Out function with bookmaker.

2.
The margin of express cash out is usually even higher than a single
bet.

3.
You can make mistakes. Thousands of players had promised not to use
Cash Out after having taken early bet calculation with smaller profit
when all that you have to do was to wait a little bit for a bigger
winning. The story of the person who has bet on the champion’s title
of Leicester 50 British pence with coefficient 5.001 and having
earned 45 pence on Cash Out after the victory of Leicester over
Sunderland in the first round is incredible. After the champion’s
title of “Foxes” his winning would make £2500.

Is
it worth using cash out betting?

The
exchange house Betfair doesn’t include margin in coefficients and
this facilitates trading. But bookmakers with their margin in
coefficients and margin for early bet calculation will worsen the
usage of Cash Out at a distance. However, if you play because you are
hazardous person and cash out betting warms it up, then why not?