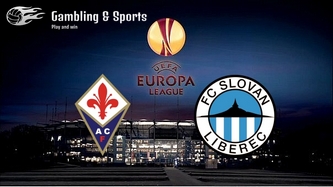 “Fiorentina” Italy will host “Slovan Liberec” Czech Republic in frames of the 4th round of group stage of the Champions League 2016-2017. The match will start on Thursday at 22:05 (GMT+2).

“Fiorentina” didn’t give “Slovan” any chances during their first meeting that had happened two weeks ago. On the 8th minute the forwarder of “Fiorentina” Kalinić has opened the score and on 23rd minute he made a double. In the middle of the second half, “Slovan” had managed to score one goal, but just 10 minutes later the gates of “Slovan” were conquered for the third and the last time.

It is unlikely, that we will see something different this time. The winning in this match will five “Fiorentina” the right not to be nervous during the next matches as it will lead this club into playoff. “Slovan” can’t play on the level field with such teams.

We wait for a confident winning of hosts. The gap between these two teams is too deep. The best bets on the match “Fiorentina” – “Slovan Liberec” will be:

“Slovan” has scored in every of three matches of this group stage.

“Fiorentina” this season hasn’t lost at its home field.