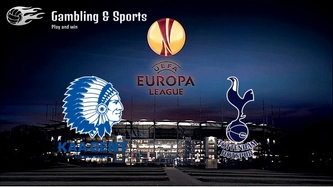 Analytics
and review of the match Gent
– Tottenham

One
of the pairs of 1/16 finals of the Europa League consists of Gent,
Belgium, and Tottenham, England. The first match will be held in
Gent on the 16th
of February and will start at 20:00 (GMT+2).

Gent
has passed the group stage, having left behind the customer of Europe
League play off – Braga, Portugal. But to tell the truth, the club
didn’t impress anyone. Having played 2 matches against the leader
of the quarter Shakhtar Donetsk, Gent has missed 10 goals. Also this
club is not confident at national championship. After the 24 tours of
the Belgium championship Gent is only the 6th.

Tottenham
was clearly unsuccessful in Champions League group. Ahead of this
club are Bayer, Germany and Monaco, France. But during the first half
of the season, “spurs” were not very impressive. But now the team
of Mauricio Pochettino can give a head start to Monaco and Bayer but
the moment’s gone.

Tottenham
is considered to be the main favorite of this tournament. But this
estimation should be proved starting with the first match. In our
opinion the best bets on the match Gent – Tottenham will be:

Gent
and Tottenham have never met with each other before.

As
for now Tottenham has 11matches of unbeaten streak.