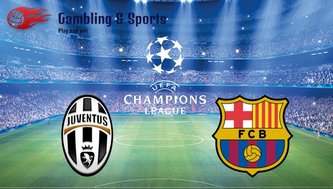 Analytics
and review of the match
Juventus
– Barcelona

On
Tuesday, on the 11
th
of April there will be held the first match of ¼ finals of the
Champions League between Juventus, Italy and Barcelona, Spain. This
match will be held in Turin at 20:45 (GMT+1).

Barcelona
had made a real comeback during the last round (0:4). Barcelona
deserves the title of the Champions League right now but Juventus has
different opinion. The club from Turin didn’t experience any
resistance from Porto last round, having won with the score 3:0
according to the total score of two matches.

Juventus
is practically unbeaten at its home arena and this fact is known not
only in Italy. Now the Italians can fight on equal ground with
Barcelona . And home arena will help Juventus a lot.

Juventus
won’t lose this game. It is too good at its home arena. In our
opinion the best bets on the match Juventus – Barcelona will be:

Juventus
and Barcelona had met three times in the 21 century. Each club has
won one match and one more match had ended with a draw.

The
bet ‘both to score’ was successful for all previous matches.