In a quarterfinal of the Champions League the destiny has brought together two English clubs – Liverpool and Manchester City. After the draw procedure the representatives of both teams have said that they aren’t really glad to meet with each other. They say that it is more interesting to travel to other countries in Euro cups. Nevertheless, the English football had got a great advantage because of this opposition as one of the teams will surely play in the semi-final of the strongest club tournament of the continent.

The squad of Liverpool was quite predictable. If to compare to Saturday
match against Crystal Palace, Jurgen Klopp has made two changes. In
the center of defense Dejan Lovren has substituted Joel Matip who has left the team till the end of the season and Alexander Oxlade-Chamberlain was playing instead of Wijnaldum Georginio.

Josep Guardiola has moved three nominal central defenders from the
first minutes as in the last game against Everton. At the same time
the number of players in defense in the scheme of Manchester City has
been changing depending on the fact whether the team possessed the
ball or not.

Theteams immediately began to please the fans with good dynamics.
Liverpool has actively spent starting minutes but Manchester City has
quickly won back the ball. The hosts at the same time were thinking
about the counterattacks and the first of them has ended with a goal
on the 12th minute.

Everything has begun with the fact that Leroy Sane has made a
mistake with assist. The team from Merseyside has immediately moved
forward. In the first phase of attack Roberto Firmino has short at a
short distance but Ederson could save the ball. Kyle Walker couldn’t
take out a ball and Firmino has rolled it out to the center on Salah
who easily made an accurate shot. According to repeats, at the
beginning of counterattack Salah has got into a small offside in the
middle of the field, however it was difficult to referee to notice it
in dynamics. 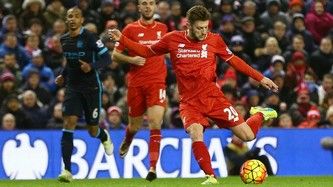 Manchester City has tried to hold out against the rival. Leroy Sane has dragged
a ball to penalty area of the rival and has kicked – it came near
the right goalpost. In the middle of the second half Jurgen Klopp’s
team could strengthen its advantage. Alexander Oxlade-Chamberlain
has reminded the fans that his level of skills is high. He has
received a ball in 25 meters from the gates and has made absolutely
perfect shot just under the left goalpost practically in “nine”.
Ederson had no chances.

Half an hour has passed and the team of Josep Guardiola was shocked with
the third goal. Mohamed Salah from the middle distance has kicked on
the defender. The Egyptian has thrown the ball to the gates and Sadio
Mane has made a header. The Reds could have made the match outcome
rather funny.

At the beginning of the second half the fans of Liverpool have
experienced unpleasant emotions. Mohamed Salah was injured and has to
warm the bench having given way to Wijnaldum
Georginio.

Bearing in mind the score, Jurgen Klopp has made a decision to let
the football player to the middle line of the field. Josep Guardiola,
in turn, has let out Raheem Sterling instead of İlkay Gündoğan.
Manchester City has taken an initiative and with every minute has
been improving the % of ball possession. But the number of dangerous
moments was not high.

Time
went and Manchester City couldn’t press the rival to the gates in any
way. At the end of the meeting the guests have managed to send the
ball to the gates of their rivals, however during the attack the side
referee has noticed minor offside. The final score – 3:0. Liverpool
has laid serious claim for getting into the semi-final of the
Champions League, having ruined Manchester City in 30 minutes of the
game. The team of Josep Guardiola didn’t score any goal. This is a
real fiasco.