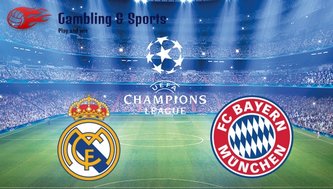 Analytics
and review of the match Real
Madrid – Bayern

Bayern
has spent the perfect first half of the home match. It had managed to
score one goal during first 45 minutes and in case Vidal converted a
penalty kick on last minutes the match would end differently. But the
second half was played by absolutely different Bayern which was pale
and didn’t impress the audience. Just after the break Ronaldo made
use of this dramatic change and the fact that Martínez was sent off
the field had made it possible for the Portuguese to bag a brace. The
team was desperately lacking Lewandowski and his goal-scoring flair
but he will take part in return match.

But
Bayern has little chances to over play Real. And the problem is not
even the lost home match but the fact that in Madrid Bayern will be
left without defense. Two center defenders – Boateng and Hummels –
are injured and Martínez is disqualified. It is not clear who will
be playing in Bayern defense but such kind of defense won’t be able
to stand out Real, Madrid.

We
are waiting for a goal-scoring result. Lewandowski traditionally
will score one or two goals but hosts won’t be passive for sure.
The best bets for the match between Real Madrid – Bayern will be:

Real
had won over Bayern in 5 last home matches in a row.