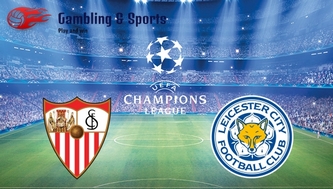 Analytics
and review of the match
Sevilla – Leicester

One
of the pairs of 1/8 finals of the Champions League consists of
Sevilla, Spain and Leicester, England. The first match will be held
in Sevilla on the 22
nd
of February and will start at 21:45 (GMT+2).

To
tell the truth, this is the weakest pair among all 8 pairs of this
season. The winner in this pair will probably end its performance
next round. But in the Europe League these teams would be the main
favorites. Sevilla has passed the group stage with great difficulty.
The second place this club has taken only due to unstable Lion and
weak Dinamo Zagreb. Leicester, in its turn, has started this group
stage very confidently and by the time of last match against Porto
ensured the first place. But still it is not very ethical to lose the
last, not very important match with the score 0:5. But judging by the
way Leicester is performing in this season , the surprising thing is
that the team had managed to get into play off at all. Sevilla has a
lot of experience in Euro cups and that is its absolute advantage.

At
home Sevilla is very strong contrary to away matches. The team of
Sampaoli will do everything possible to win. In our opinion the best
bets on the match Sevilla-Leicester will be:

Sevilla
and Leicester have never met with each other.

This
season Leicester has won only two away matches. One in the Champions
League against Brugge and one in the match of Football League Cup
against Everton.